13 of the best beaches in the south west

There's fewer places for a great day out while the sun is still shining than the beach! We're lucky enough to have a region with an enviable coastline full of gorgeous beaches, so plan your day trip to somewhere new! Let us know what your favourite beach is - and don’t forget to tag us in your pictures on Instagram.

A direct train from London Waterloo bring you to Bournemouth and seven miles of award-winning beaches - as seen in our latest TV advert. Nestled beneath a magnificent cliff line, the bay enjoys its own micro-climate, some of the warmest sea temperatures in the UK and stunning views of the Isle of Wight and the Purbecks. Whatever you want from a day at the beach, you’ll find it all here. 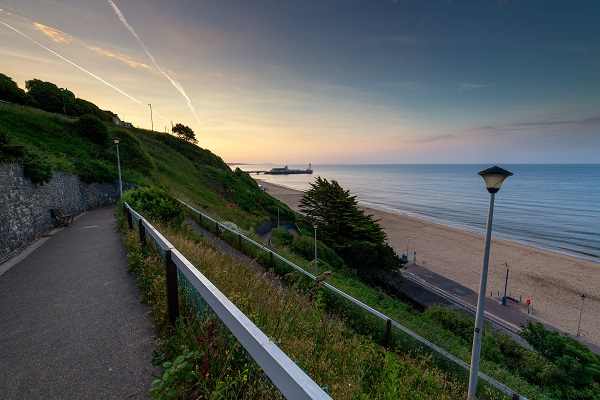 Whether it’s chilling on a deckchair, strolling along traditional seaside piers, relaxing in a hired beach hut, enjoying tasty food or just admiring miles of breath-taking coast line – Bournemouth beach is the ideal location whatever the weather or time of year. Every section of Bournemouth’s beach offers a different experience, so why not try out one of many superb water sports or enjoy plenty of family attractions at Pier Approach? There is a bit of the beach with your name on it!

Hengistbury Head is a dramatic headland in Bournemouth situated to the south of Christchurch Harbour. It is an outstanding site for wildlife and archaeology and offers beautiful beaches and views across the New Forest, Isle of Wight and Purbecks. Access is easy for all ages and abilities and there is a land train linking to Mudeford Spit, and ferries to Christchurch. Buses run close by. 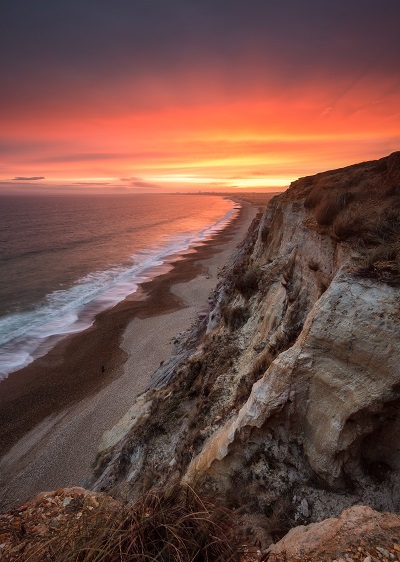 From Bournemouth station you can take a short bus journey to this vast area of sandy beaches and heathland. A glorious slice of natural coastline in Purbeck featuring a four-mile stretch of golden, sandy beach, with gently shelving bathing waters and views of Old Harry Rocks and the Isle of Wight. Studland Bay is ideal for water sports and includes the most popular naturist beach in Britain. The heathland behind the beach is a haven for native wildlife and features all six British reptiles. 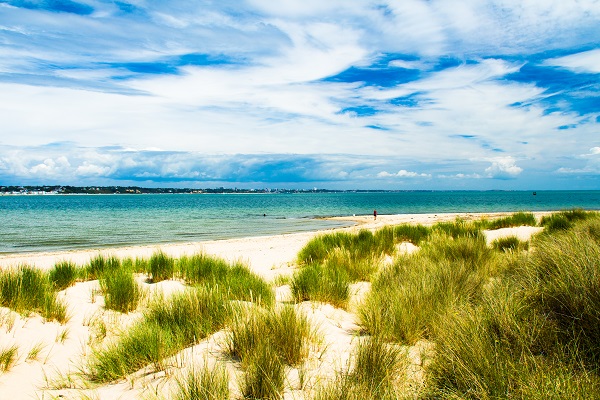 Designated trails through the sand dunes and woodlands allow for exploration and spotting of deer, insects and bird life as well as a wealth of wild flowers. Studland was also the inspiration for Toytown in Enid Blyton's Noddy!

A short bus or taxi journey from Poole train station is Sandbanks. It’s easy to see why it’s been the winner of the prestigious Blue Flag award for a consecutive 31 years and with its soft, golden sands and breathtaking views, it is no wonder that Sandbanks is considered one of the best beaches in Britain. Facilities include a crazy golf course, children's play area, a slackline, barbecue area and a café. You can even hire beach hut!

There are two trains an hour from London Waterloo to this award winning beach, just a short walk from the town centre. Weymouth Beach is a three mile long beach, and there's plenty of entertainment for everyone to enjoy ranging from traditional attractions such as Punch & Judy and donkey rides, to lively events such as beach volleyball championships, live music and free summer firework displays. The views from Weymouth Beach and the bay are spectacular, stretching across the horizon taking in the Jurassic Coastline.

One of Dorset's most photographed landmarks, Durdle Door could be an attraction in its own right. It was formed as thousands of years of seawater bored a hole through a limestone cliff. The pebble beach offers impeccable water quality for a spot of swimming. Plus, as it's part of the Jurassic Coast, there's plenty of possibilities for fossil hunting while you're there! 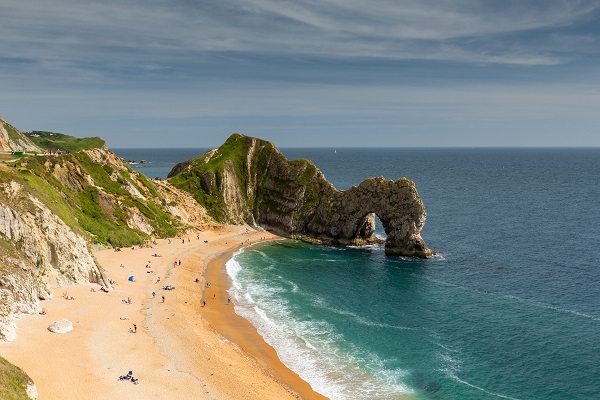 Just next door is Lulworth Cove. At first glance, it almost looks like it has to have been man-made, right? But this is an all-natural phenomenon, despite it's almost-perfect circular shape. This white pebble beach is rock pool heaven when the tide runs out, teeming with sea life. The blue waters make it perfect for a dip too! 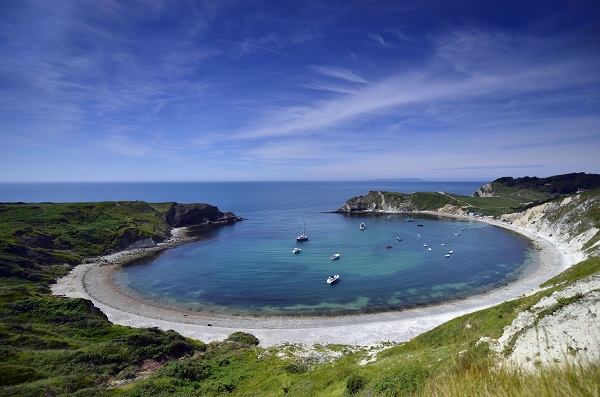 With direct trains from London Waterloo to Portsmouth and Southsea station is the UK’s only Island city. Described by many as the jewel in the crown, lies Southsea, a destination which prides itself on having something for everyone. From the beach with views across the Solent to the Isle of Wight, to the vibrant, culturally diverse town, which is home to some of the best independent shops, venues and festivals in the South. One main benefit is that, being less than two miles wide and 1.5 miles long, the entire Southsea area is walkable for most. It's also incredibly flat, meaning those walks feel like a breeze. Walk through Southsea streets will also find their attention drawn by the blue plaques on display, showcasing some of the area's more well-known former residents. Among those honoured are creator of Sherlock Holmes, Sir Arthur Conan Doyle, acclaimed writer and poet, Rudyard Kipling, and comedian Peter Sellers. 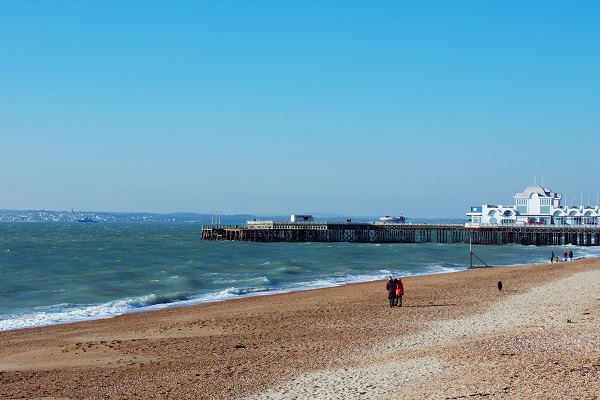 With direct services from London Waterloo to Havant a short bus or taxi ride brings you to Hayling Island.This charming, peaceful island with its country village atmosphere is a popular tourist resort. At over four miles long, the beach is beautifully clean and has a Solent Water Quality Award, making it ideal for a refreshing dip in the crisp ocean. 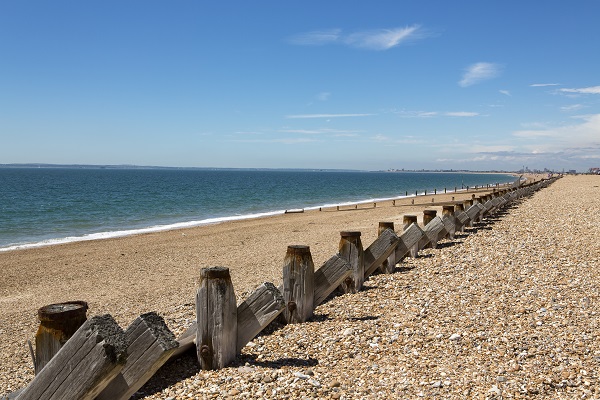 The grassy dunes, are a nature lovers paradise with wild flowers, plants and birds. The Beachland has over 100 acres of land between the sea front and shore!

With a multitude of stunning beaches recognised as some of the best in Europe Isle of Wight is a fantastic place to visit for beach lovers. The Island Line train service operates from Ryde Pier Head round the east coast of the Island, down through to Shanklin – directly linking with both Ryde passenger ferry services, providing a through service from London Waterloo. With 57 miles of varied coastline the Island yields a fantastic array of beaches, which were awarded a combined total of 17 Blue Flag and Seaside Awards in 2014. Here’s a few to add to your list to explore:

One of the Isle of Wight’s best kept secrets is Compton Beach. Located in West Wight, Compton offers a two mile stretch of contrasting golden and dark sands, with rolling seas, tumbling multi-coloured sandstone cliffs, and the white chalk cliffs at Freshwater in the distance. 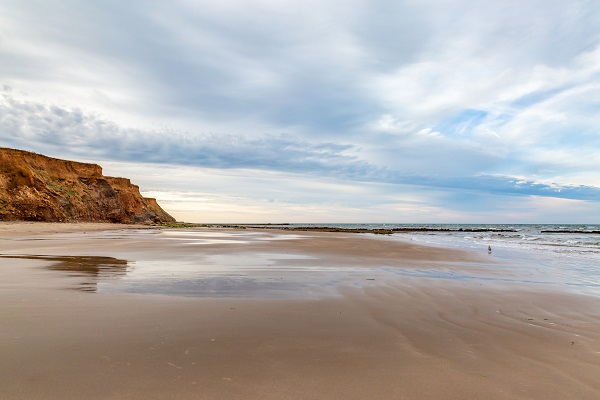 Shanklin Beach is a one of the Isle of Wight’s best known stretches of golden sands, which backs onto a traditional English seafront promenade. The beach is located on the south east coast of the Isle of Wight, with groynes keeping the sand in place and a high sea wall and pavement promenade between the sea and the Esplanade. A 'bucket and spade' family beach holiday destination, Shanklin Beach lost its pier after the hurricane of 1987 but there is now a semi-circular vantage point with benches where the entrance to the pier once stood.

Sandown Beach is one of the Isle of Wight's finest and most recognised beaches, with miles of soft golden sands crowned by Sandown’s pleasure pier. Popular with tourists and surfers, Sandown is a traditional 'bucket and spade' holiday beach with all that you expect from an English family beach. 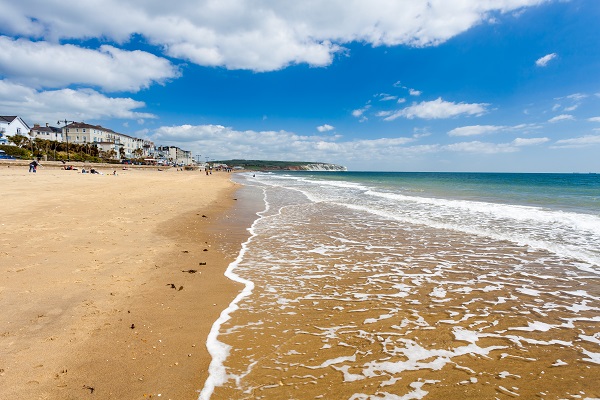 Freshwater Bay can lay claim to having a unique feature when it comes to beaches on the Isle of Wight. The noise made by the water against the flint and chalk of the cliffs is like no other! It's one of the most picturesque beaches on the island. There's opportunities for walks in the sand and rockpooling at low tide. You could also try kayaking out with a guide to see the caves used by smugglers! 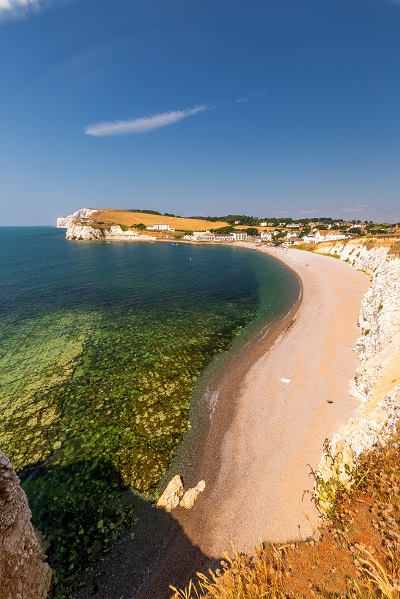 Getting to any of these beaches is easy thanks to regular trains across the south west. And it doesn't have to break the bank either - with great value Advance fares you can save up to 50% compared to on-the-day tickets. You'll even get discounts on top with your Railcard - save a third on grownups and 60% on kids' fares with a Family and Friends Railcard.