From the proud, historic warships facing off across the dockyard to the ultra-modern eateries at the top of the harbour’s Spinnaker Tower, Portsmouth is home to the past and future of waterfront wonders. Awash (quite literally) with maritime heritage, its famous dock is the heart of the city, but around it has grown a vibrant modern centre of culture, entertainment, art galleries, shopping and dining that makes Portsmouth the perfect destination for a fantastic day out on the waves or an unforgettable night out on the tiles.

Book a train ticket to one of Portsmouth’s two mainline railway stations, Portsmouth Harbour and Portsmouth & Southsea. The latter is the gateway to the city centre, where plenty of buses and taxis will whisk you on your way to the nearby theatres, concert venues and shopping arcades – why not pick up a great-value PlusBus add-on with your ticket, granting you unlimited bus travel throughout the town? Portsmouth Harbour, handy for the Mary Rose museum and the galleries and shops at Gunwharf Quays, is the place to get your sea legs on – Wightlink Ferries operate services from the end of the station platforms to Ryde on the Isle of Wight, Gosport Ferry’s pontoon is just a short walk from the station, while Hovertravel’s hovercraft zoom across the Solent from the nearby Gunwharf Terminal.

First port of call for any landlubber hitting this pride of the south coast should be Portsmouth Historic Dockyard, bobbing with legends of naval military history. Enjoying pride of place since 1812 is the spectacular HMS Victory, Vice-Admiral Nelson’s flagship at the Battle of Trafalgar and now a living museum to the Georgian navy – arrive early to beat the queues and check the diary to see if it’s hosting one of its sporadic rum dinners while you’re in town. Britain’s first ironclad warship, HMS Warrior, is moored here too, and Tudor buffs shouldn’t miss a tour around the Mary Rose, Henry VIII’s flagship, which mysteriously sank in 1545 only to be raised again in 1982.

More modern waterfront treats await at the neon needle of Spinnaker Tower, designed in the shape of a sail and boasting panoramic restaurants, a sky walk and – for hardcore thrill-seekers – a 100-metre abseil straight down the side.

Cultured types might like to take in the 12th century St Thomas’ Anglican Cathedral in Old Portsmouth, and bookworms should visit the birthplace of Charles Dickens or the museum dedicated to another one-time resident, Sir Arthur Conan Doyle, which includes the world’s largest collection of Sherlock Holmes memorabilia.

After touring Portsmouth’s seafaring gems, why not hit its nearby jewel of entertainment and retail at Gunwharf Quays? A stylish enclave of 90 high-end designer fashion boutiques, late night bars, cafés, gyms and modern art galleries like Aspex, it also includes a Hollywood Bowl, Vue cinema and casino, where Portsmouth’s high rollers fling chips like there’s no tomorrow. Further into town the Cascades Shopping Centre collects plenty of high street chains near Portsmouth & Southsea station, while Palmerston Road in Southsea offers antique and vintage shops nestled between independent bars and restaurants, plus regular markets and festivals.

Pick of the plates on Portsmouth’s thriving foodie scene are at Restaurant 27 in Southsea, where chef Kevin Bingham brings his experience in Michelin-starred kitchens to bear on the most inventive ‘global French’ cuisine in town. Sant Yago on Clarendon Road is a quirky cocktail nook where the hipper locals sample tables full of stunning contemporary tapas, and music lovers should rock up to Pie & Vinyl, where you can browse the vinyl aisles or watch up-and-coming bands between mouthfuls of band-themed pies. We recommend the ‘Satay-Day Night Fever’.

Naval accommodation doesn’t mean being clapped in irons in a frigate hold any more – Spitbank Fort, one of 5 fortifications built in the middle of the Solent to defend against Napoleon, has been converted into a luxury hotel with a nautical bent. Prefer sleeping on dry land? Try Southsea’s unique modern-classical Number Four boutique hotel with a sister gastropub, The Florence Arms, 10 minutes walk away. Number Four is part of the Mercer Collection of classy and fabulous Portsmouth boutique hotels – equally as stylish are The Florence House, Somerset House and Edwardian, adults-only Clarence Hotel on the esplanade.

London Waterloo to Portsmouth from:

7 things to do in Portsmouth

From historic castles to a thriving art scene, as well as some of the best shopping in the country 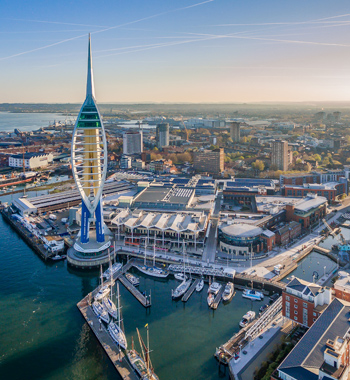 A family weekend in Portsmouth

Brighten up your weekends with fun family activities in Portsmouth