Our recommendations for celebrating Lá Fhéile Pádraig on 17 March

The evenings are getting longer, it’s warming up and Spring is officially on its way. And what better way to congratulate ourselves for making it through the first two months of the year than with some good old Irish spirit.

St Patrick’s Day is almost upon us, so it’s worth giving a thought to where you’ll be celebrating this (Irish) national holiday. So, to help you decide, and give you more time to find those green shamrock headboppers, we’ve compiled a list of the best Irish pubs around our network.

This Irish Pub may be a 20 minute walk from Portsmouth and Southsea Station, but it’s certainly worth it! Claiming to serve ‘the best pint of Guinness on the South Coast’ (and with the awards to prove it), Shenanigans guarantees a warm welcome and a friendly atmosphere.

Head down this St Patrick’s Day for a delicious breakfast followed by live music from 12pm and an appearance by their resident band ‘Shenanigans’ in the early evening.

A mere stone’s throw from the station, this traditional Irish pub is a firm favourite of the locals, as well as the many Irish internationals who have donned the blue and white stripes of Reading FC over the years. The welcoming and friendly pub always goes wild for St Patrick’s Day with green flags and garlands, Irish dancing and the Guinness will be flowing all night long!

Brendan and Lynda have been providing fresh, homemade Irish food in this cosy setting for nearly 10 years. This St Patrick’s Day Connolly’s are showing all the day’s live sports as well as Irish dancers and two live bands! It promises to be a great day out for the family.

Not far from Wandsworth Town station, this small family run Irish pub is all about the great craic and is filled with Irish memorabilia. Ther'll be live music as well as an array of drinks promotions and traditional Irish food. It’s a day not to be missed!

This relatively new Irish pub has been an instant hit with the Kingston locals. The interior has been designed to resemble a traditional Irish street scene with shop fronts as a backdrop. With live bands, starting from 2pm until late, Irish dancers and free bacon and cabbage, it’ll seem as if you’re spending the day in the Irish capital itself. 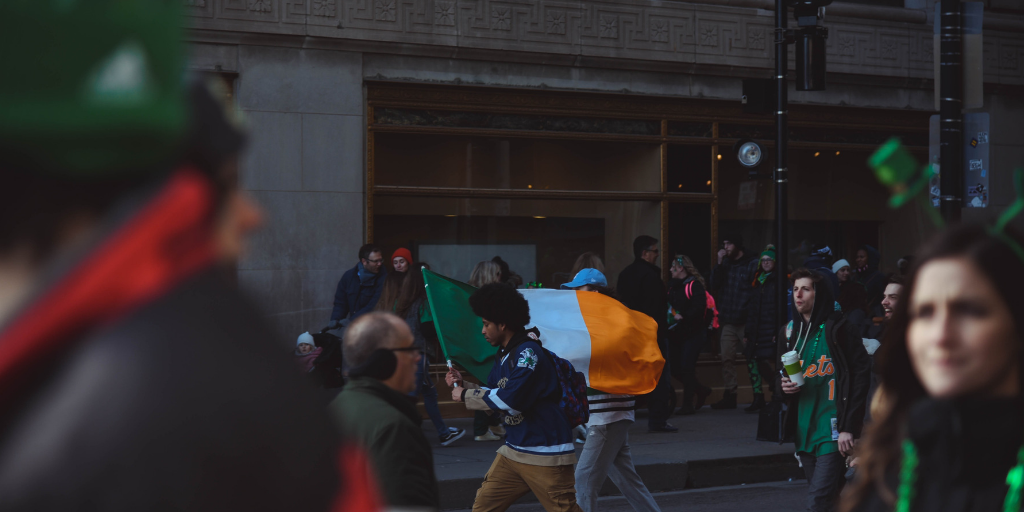 Also new on the scene is Exeter’s The Stand Off. Less than a 20 minute walk from Exeter St David’s station, this Irish pub was recently re-opened after a major refurbishment by Exeter Chiefs player Gareth Steenson, who is looking to give people an Irish feel while in Devon.

This cosy, traditional Irish pub with its roaring open fires is perfect for a visit after a wander around Battersea Park. For some St Patrick’s Day celebrations, head down to Flanagan’s for Irish music & dancers and an excellent pint of Guinness. Make sure you don’t accidentally adopt a furry friend from the Cat’s and Dog’s home across the road once the evening’s celebrations finally come to an end!

This aptly named Irish pub harks back to the days of the Guinness advertising campaigns which featured the famous toucan balancing a pint of Guinness on its beak. A veritable temple to the black stuff, this legendary location once welcomed Jimi Hendrix to play - and the basement bar is described as an oasis of calm in busy central London.

The toucan balancing Guinness on its beak came about from artist John Gilroy after a visit to the zoo where he watched a sea lion balancing a ball on his nose.

Mc & Sons is a traditional old Irish boozer cross serving authentic Thai food and fantastic beer in the heart of Southwark. If you’re looking for a twist this St Patrick’s Day, Mc & Sons is the place for you – you’ll find live music and an Irish Fayre as expected, as well as an eclectic mix of Thai Street food to tantalise the taste buds.

Save when you book in advance

See how you can save

Save when you book in advance

See how you can save