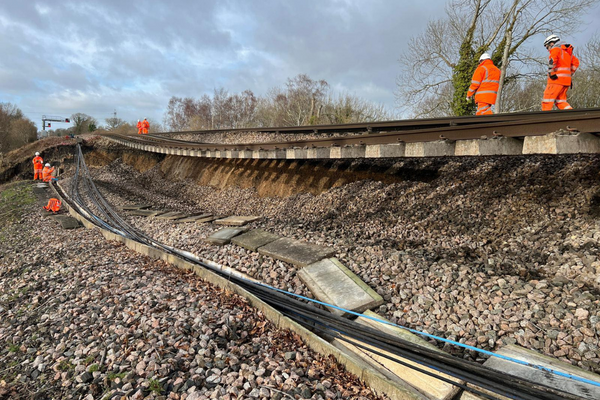 South Western Railway (SWR) is advising customers travelling between Basingstoke and Woking this week to only do so if their journey is absolutely necessary, as a major landslip in the Hook area is severely reducing the number of trains that can safely run on the line.

As a result, all services to London Waterloo from Exeter, Salisbury, Weymouth, Bournemouth, Southampton, and Winchester will terminate at Basingstoke, where an extremely limited shuttle service will connect with trains at Woking. Customers planning to travel on the mainline between Basingstoke and Woking are asked to only do so if absolutely necessary.

On Tuesday 17 January, there will be no through trains to London Waterloo from Exeter, Salisbury, Weymouth, Bournemouth, Southampton, Winchester or Portsmouth via Eastleigh (or stops on those lines). Instead:

SWR will work with Network Rail to add to this timetable if at all possible in the coming days, but given the scale and complexity of the infrastructure works at Hook, customers are urged to continue checking before they travel.

Sunday’s landslip was one of 11 separate incidents that affected infrastructure on SWR’s routes overnight on Sunday and into Monday. This included major flooding in the Sway area, which added to disruption on already revised services between Weymouth and London Waterloo.

A further severe landslip occurred in Addlestone, on the line between Virginia Water and Weybridge, which means trains were unable to run on Monday. It is likely that trains will be unable to run on the line on Tuesday, but customers should check before they travel. Buses are replacing trains on this line whilst engineers assess the damage and carry out repairs.

“We are deeply sorry for the significant disruption felt by customers across our network on Monday. What began as a major landslip at Hook was then compounded by 10 separate weather-related infrastructure failures, which have made planning and delivering a reliable train service across our network very difficult.

“We are working hard to provide a service that our customers can rely upon and unfortunately, we will be unable to run through services from Exeter, Weymouth, or Portsmouth (via Eastleigh) to London Waterloo from Tuesday. An extremely limited number of services will be able to run between Basingstoke and Woking, but we are asking customers to avoid travelling through the affected area if they can.

“With the repairs at Hook set to take at least a week to complete it is likely that further service alternations will need to be made. We are sorry for the ongoing disruption caused by the landslip and will communicate any changes to our customers as soon as possible.”

Customers should check www.southwesternrailway.com/plan-my-journey for the latest information.