Competition winners enjoy ‘The Big Picnic’ on the Isle of Wight 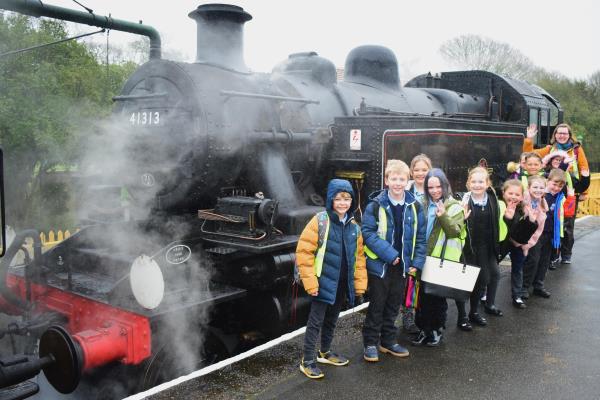 Yesterday, more than 150 colouring competition winners from local schools took part in ‘The Big Picnic’, on the Isle of Wight.

The colouring competition was organised by South Western Railway’s (SWR) Isle of Wight Community Rail Partnership (CRP) to celebrate the launch of their new book, ‘The Squirrels’ Tale’.

The winners, Key Stage 2 pupils from schools local to the CRP’s route on the Island, Lymington and New Forest, were hosted by The Isle of Wight Steam Railway, where they all enjoyed a picnic, tour and a ride on the train.

The Squirrel’s Tale is a story of the CRP and transport partners working together to help the Isle of Wight’s red squirrel population remove the grey squirrels trying to take over the Island.

Key Stage 2 children in eight schools in the area were given copies of the book, which contained a competition to colour in maps of the ‘Red Squirrel Trails’ accessible walks, with the winners receiving the prize of a visit to the steam railway for ‘The Big Picnic’.

Bobby Lock, Community Rail Manager for the Isle of Wight CRP, said “The Squirrels’ Tale has been a lovely project to work on and one close to my heart and so it was joyous seeing children from schools on the Island and the New Forest enjoying their day.

“Our partners South Western Railway, More Bus, Southern Vectis, Wightlink, and the Isle of Wight Steam Railway worked tirelessly to make sure it went smoothly - not forgetting Cheeko the Squirrel who surprised the children at lunchtime!

“Now we’d like to see more families come and explore all the places those cheeky squirrels love around the railways, both on the Island and at Lymington and Brockenhurst.“

Anita Wilcox, Head Teacher of Dover Park Primary School, said “The children really enjoyed reading The Squirrels’ Tale and finding out about the grey and red squirrels. They particularly liked that it was set on the Isle of Wight as they recognised many of the places from the story.

“Many of our children had not travelled on the new Island Line train or the steam train before, so this was really exciting.

“Due to the pandemic the children have not had the opportunity to get out and about, so they just loved learning and doing new things. They were really interested in the history of the train and enjoyed finding the clues whilst on the scavenger hunt.

“They all had a wonderful time and thoroughly enjoyed the day, despite the rain. “

Paula Aldridge, SWR’s Community Rail Manager, said “Our Community Rail Partnerships do so much wonderful work in their local areas, and this is just one example of the great ideas they come up with. We’re delighted to support them and are so pleased that, despite the unfriendly weather, the children have all enjoyed their day out”