Murals and planters brighten up Hamworthy station for customers and colleagues

Members of the local community gathered at Hamworthy Station on Saturday for the unveiling of a project which is set to make the station a more welcoming place for all.

New murals, which were painted by a group of young people from the local community, were revealed during the event, and planters are now bringing the promise of natural beauty to the platforms.

The murals were the brainchild of Ann Khambatta who was the community worker for the area containing Hamworthy Station and who died in January of this year. She had been asked if she could do some work with the local community to make Hamworthy Station more friendly for all. 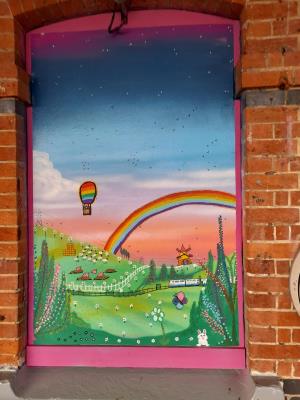 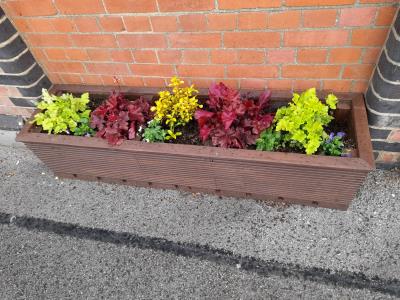 Mel Lucas, the station adopter, took on the task of bringing Ann’s plan to life and worked with the youngsters and two local graffiti artists at a series of workshops in the local church hall for a number of weeks before hand. After gathering ideas and planning the work they finally got to put their artworks on the station wall and platform windows, and they will be continuing by painting the public tunnel.

The project is supported by SWR, through its Customer and Communities Improvement Fund, and is part of the ‘Mind the Gap’ scheme, which benefits people who live near and use SWR stations by encouraging local communities to get involved in improving their appearance.

Mel said “It has been a great opportunity to improve the feel of Hamworthy station and for the young people involved the impact has been immediate and so positive. We have had many compliments from both residents and train passengers who say how much it has brightened their day. We have also been pleased by the reaction from staff in and around the station who have been involved in conversations about placing the planters and ongoing developments of the artwork. A really fun project that has had so many benefits, thanks to Mind the Gap for the funding to make it all possible!”

Paula Aldridge, SWR’s Community Rail Manager said “We are delighted to have helped the local community at Hamworthy to make their station a brighter and more welcoming place. Other local stations in the area will soon start to see improvements thanks to the Mind the Gap scheme”.

The ‘Mind the Gap’ scheme is a wide-ranging project designed to support local communities in the Bournemouth, Christchurch and Poole area (BCP). It aims to increase community engagement in stations and rail travel, reduce social isolation in the communities around BCP stations, build community interest in the history and heritage of BCP railways and stations and bring unused platform rooms back into use through refurbishment and community support projects.