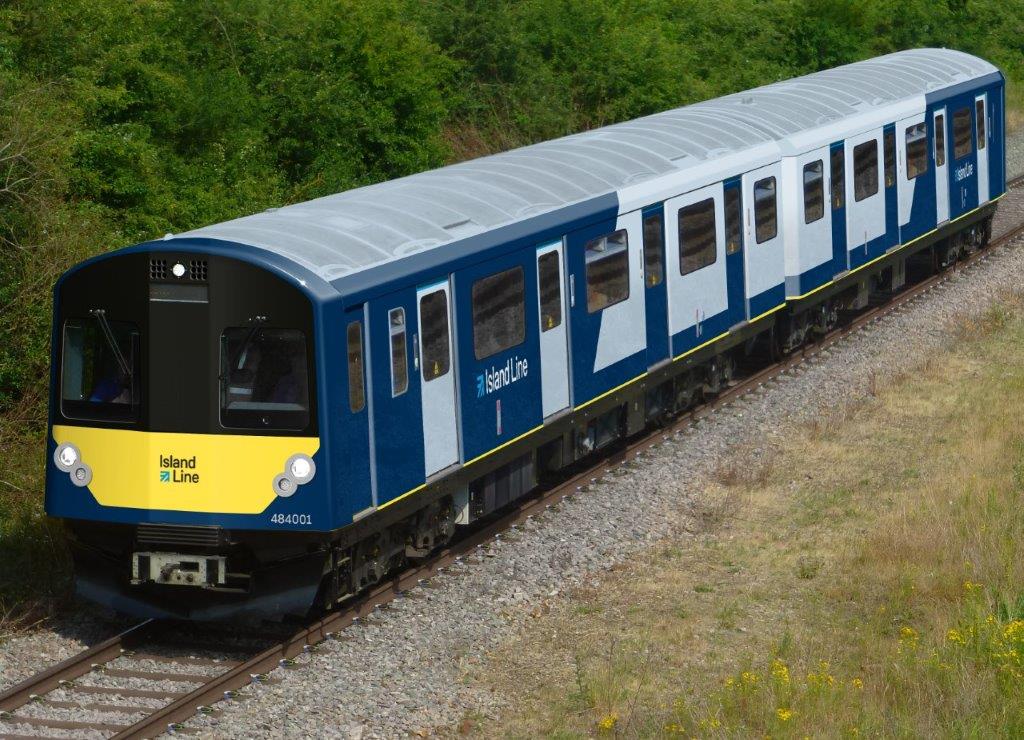 This follows a multimillion investment announcement by Network Rail into improvements to renew Ryde Railway Pier where trains connect with ferries to Portsmouth.

The proposals were developed in partnership with key stakeholders on the island, including Isle of Wight Council and Solent Local Enterprise Partnership. They have agreed to jointly contribute £1 million to fund a new passing loop at Brading, helping to deliver an even interval half-hourly service to the pier.

The Department will support the investment into improving the tracks and other infrastructure to support the new trains. 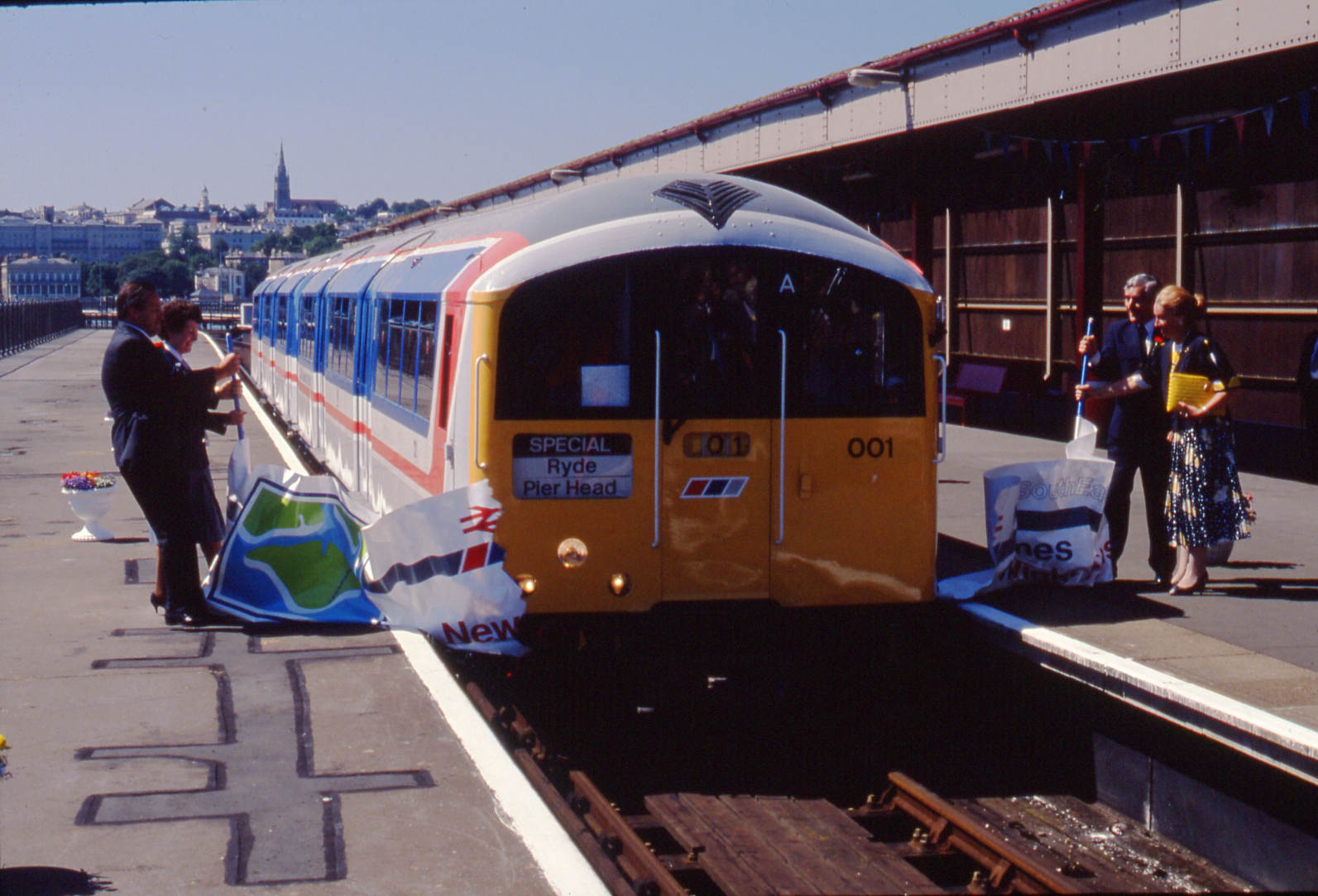 “These trains have diligently served passengers since 1938 – coinciding with the first ever edition of the Beano and the maiden voyage of the record-setting Mallard steam train - so this upgrade is a long overdue boost.

“This investment in the Island Line means more punctual, reliable trains and better connections to ferry services, supporting local residents, businesses and tourism. This underlines our determination to provide passengers across the country with the modern rail network they expect.”

“This is a great day for the Isle of Wight. I want to pay tribute to our team at Island Line who have kept the current 1938 stock going for so long and to all of the stakeholders who helped us develop our proposals. I look forward to our continuing partnership as we deliver the next exciting chapter in Island Line’s history.”

"I am really pleased to welcome the decision by the Department for Transport to invest millions into Island Line. Today’s announcement follows a long and detailed process involving South Western Railway, the Solent Local Enterprise Partnership, the Isle of Wight Council and our MP Bob Seely aimed at securing a long term solution to Island Line.

"Islanders can now look forward to new electric trains, major infrastructure improvement and track upgrades, including a passing loop at Brading, enabling the synchronisation of services with the ferries - all of which supports our  desire for sustainable and environmental friendly contribution to our Island connectivity.

"A renaissance of our coastal communities is a strategic priority for the Solent LEP as we strive to raise productivity levels and spread prosperity across the Solent. Improved digital and transport connectivity is a key enabler of this renaissance , and we are delighted to be working with SWR, the Department for Transport and Isle of Wight Council to unlock funding for the creation of a new passing loop at Brading Station, allowing a more standard 30 minute service."

"Our plans for the Isle of Wight will see us making a multi-million pound investment to improve the island's infrastructure rail infrastructure and include refurbishing Ryde Pier. We are looking forward to working with SWR to deliver these improvements and to ensuring that together we continue to provide a train service for passengers for years to come."

Island Line is restricted in terms of the size of units that can run on it and so SWR has chosen Vivarail's Class 484 trains. These totally refurbished former London Underground trains will provide more capacity, better accessibility, passenger information systems and wi-fi. The two carriage trains will also have connecting gangways allowing guards to move freely throughout the whole train, collecting revenue and providing passenger assistance.

"It is a great privilege for Vivarail to be part of the wholesale upgrade of the Island Line. Vivarail will be building 3rd rail trains to make best use of Island Line's electrified track , this follows on from our diesel units for West Midlands Railway and battery/diesel trains for Transport for Wales - and is an example of how flexible the train is. I look forward to taking the first ride and enjoying the picturesque views of the Isle of Wight from the comfort of the new trains."

The first train is expected to arrive on test in early summer 2020, with track improvement works due to take place over the winter of that year.

The proposals submitted to the DfT followed an initial stakeholder consultation back in the autumn of 2017. Feedback from that consultation was then considered by the Island Forum, made of stakeholders including: IOW Commuity Rail Partnership, IOW Steam Railway, the IOW Bus and Rail Users Group, Southern Vectis, KILF, Wightlink and Hovertravel, with detailed proposals reported back to a steering group.

Isle of Wight MP Bob Seely said: “This is great news for the Isle of Wight. With the support of local campaign groups, I have relentlessly made the case for securing the future of Island Line, not just as part of my constituency’s public transport provision but also as part of the National Rail Network. I am grateful to my colleagues in Government for supporting our local train service, and particularly to the Rail Minister for visiting the Island today to make this announcement with SWR.

“This represents the first significant upgrade to the route for over 50 years, and I look forward to liaising with SWR, Network Rail and the DfT to ensure that the benefits are delivered in a timely manner, with minimal disruption. Island Line serves residents, commuters, visitors and students on a daily basis – and I know how much these rail users will welcome this overdue announcement.” 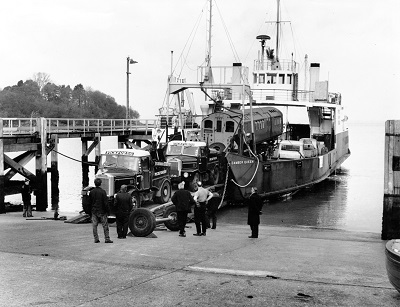 22 December 1966: Arrival of new electric trains for the Island Line
Driving Motor Second S22S, to be formed into unit 042, is unloaded from British Rail shipping ferry m.v.’Camber Queen’ at Fishbourne on 22nd December 1966. The weight of the Driving Motors necessitated the use of two Pickford tractor units for loading and unloading the ferries and also the use of a special bridge to avoid excess weight being placed on the ship’s ramp. Also, all movements of the Driving Motors were made on special sailings and on a rising tide. [British Rail (Southern) official] 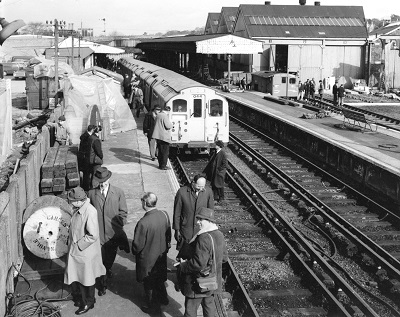 1 March 1967: First test train
Unit 044 is prepared for the first test train after current was switched on and is seen in the up platform at Ryde St Johns Road on 1st March 1967. In the right background is Ryde Works, the old steam locomotive and carriage works which was adapted to maintain the new electric trains. [Tim Genower/Isle of Wight Steam Railway Archive] 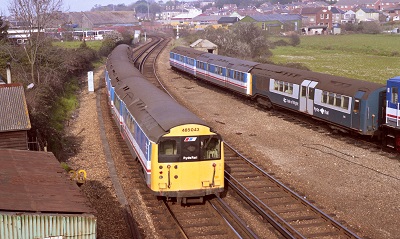 31 March 1989: Various liveries
The original ‘Standard stock’ electric trains carried a variety of liveries during their lives on the Island. Originally painted all over rail blue, firstly the doors were painted grey before ‘Inter-City’ style blue and grey was adopted in 1982 with ‘Isle of Wight’ and ‘Ryde Rail’ branding before Network South East livery appeared from 1986. Unit 485 043 brings up the rear of a seven-car up train departing Ryde St Johns Road for the Pier Head on 31st March 1989. Although the ‘Standard stock’ was now due for replacement, blue/grey car S6 would receive NSE livery shortly afterwards. [John Faulkner/Isle of Wight Steam Railway Archive] 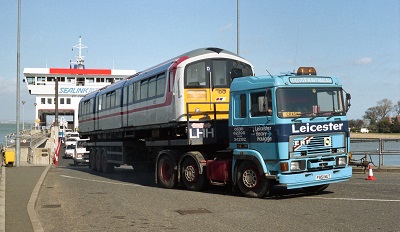 1990: Departing Sealink ferry
By the time shipment of the 1938 stock was taking place, the Isle of Wight ferries had been privatised, and much larger vessels introduced carrying the ‘Sealink British Ferries’ brand. All carriages were transferred with the bodies separated from their bogies, which travelled on another lorry, and were reunited using a large mobile crane at Sandown. Car 225 is seen leaving m.v. ‘St. Cecilia’ at Fishbourne on 15th March 1990. [John Faulkner/Isle of Wight Steam Railway Archive] 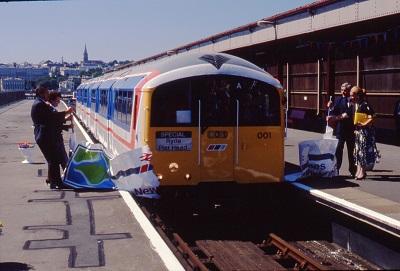 13 July 1989: First of the 1938 stock
The first of the 1938 stock, unit 483 001 was shipped to the Island on 5th July 1989 and formally launched into service on 13th July where it is seen breaking the commemorative banner at Ryde Pier Head with NSE Director Chris Green officiating and assisted by Angela Hooper, Chairman of the TUCC for Southern England. [Roger Silsbury/Isle of Wight Steam Railway Archive] 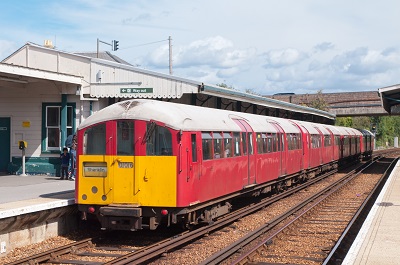 Return to the original livery
The 1938 stock was painted in Network South East livery when refurbished. During 2000 five of the remaining six operational units acquired a ‘Dinosaur’ livery, more akin to a theme park rather than part of the national rail network. The sixth unit, 007, was repainted into the livery applied when new, London Transport red with cream window pillars and London Transport branding. The Dinosaur livery was phased out in favour of unbranded all-over LT red. Following South Western Railway acquiring the franchise in 2017, some of the remaining four operational units have received ‘Island Line’ branding. [John Faulkner/IWSR Archive]