Direct trains to Corfe Castle from across Dorset, Somerset and Wiltshire this summer 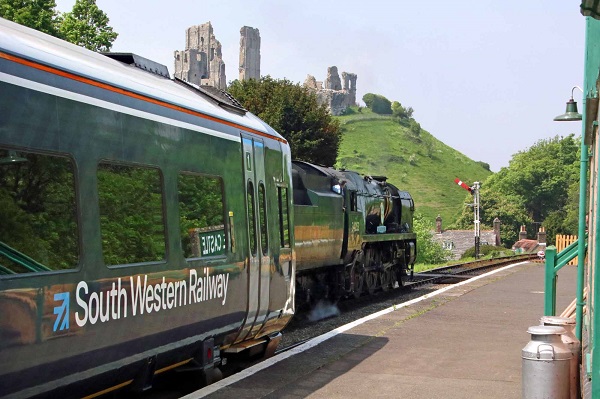 South Western Railway (SWR) and Swanage Railway (SR) are once again providing train services to historic Corfe Castle this summer after the huge success of last year’s trial (where over 4,000 tickets were snapped up).

The first summer service will run this Saturday (25 May) from London Waterloo (0635) to Corfe Castle via Salisbury, Yeovil and Weymouth.

The special summer service opens up the iconic Corfe Castle and beach at Swanage so that they are accessible by train from London and across the south west region.

Chris Loder, Head of New Trains for South Western Railway, said: “We’re delighted to be running the direct summer service again to Corfe Castle. We hope this will encourage visitors from across the UK to visit beautiful Corfe Castle and Swanage.”

David A Rawsthorn, Head of Sales and Marketing for Swanage Railway, said: “We are delighted that the ongoing partnership with South Western Railway will enable a regular train service to run again on summer Saturdays to Corfe Castle. This will give everyone the opportunity of visiting the historic Corfe Castle and join us on board our iconic steam trains to the Victorian seaside town of Swanage.”

Councillor Bill Trite, Chairman, Dorset Councillor and Chairman of the Purbeck Community Rail Partnership, said: “We look forward to the start of this service, which proved so popular last year. The trains brought much additional trade to the Swanage Railway, Corfe Castle and to Swanage itself. Many passengers also bought the add-on “Swanage by steam” fares between Corfe Castle and Swanage and their feedback was very favourable.”

To book tickets or for more information pop in to one of our station ticket offices, or book online at: www.southwesternrailway.com or visit www.swanagerailway.co.uk/summersaturdays.

History of the Swanage Railway