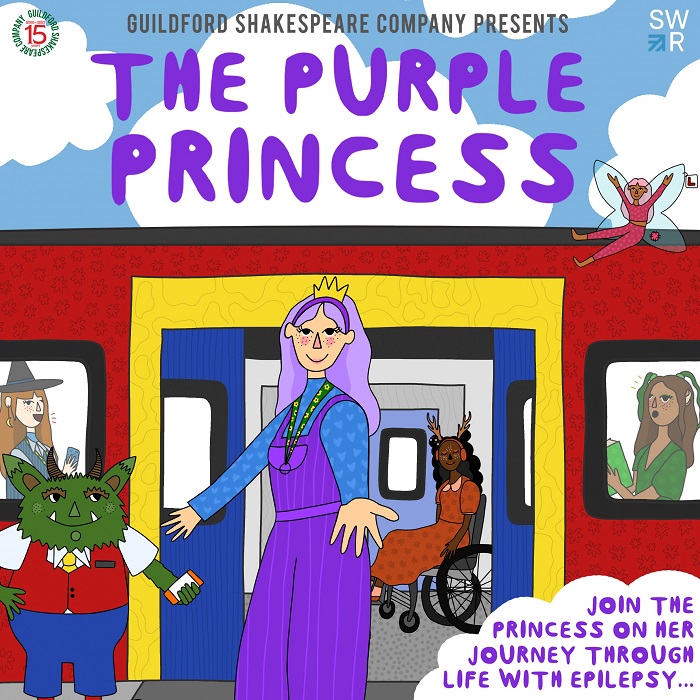 This May and June, South Western Railway (SWR) and Guildford Shakespeare Company (GSC) are bringing ‘The Purple Princess’, a short play that raises awareness of epilepsy, to primary schools in and around Guildford.

The play has been funded solely by SWR’s Customer and Communities Investment Fund (CCIF) and will help educate young railway users on what to do in the event of a fellow passenger having an epileptic seizure. The show has been inspired by the real-life experience of show Director Indiana Lown-Collins, who has uncontrolled epilepsy and has had a seizure on a train in the past.

To engage younger audiences, the play merges modern life with fantasy creatures. The Princess wears glass trainers and meets trolls at the train station, grumpy commuter elves and dwarf construction-workers. When the Princess has a seizure on a train, her best friend, a trainee fairy godmother, rewinds time to help her. With the help of the children in the audience, the characters react to the seizure, so the Princess has the best chance of a positive recovery.

Named after Purple Day, the international day for epilepsy awareness, ‘The Purple Princess’ was created with support from The Epilepsy Society and Epilepsy Action. The guidance within the story is taken from The Epilepsy Society’s “Calm, Cushion, Call” campaign. These three simple instructions – stay calm, cushion their head with something soft and call for an ambulance – are the basis of seizure first aid and could help save a life.

Indiana Lown-Collins, Director of The Purple Princess, said: “1 in 20 people will have a seizure in their lifetime and many more will witness one. Knowing what to do is crucial and can save someone’s life. Living with a disability, such as epilepsy, can feel very isolating, as the condition is widely misunderstood. The common misconception that epilepsy doesn’t affect your normal life is hard to deal with. On many occasions, I’ve feared for my life because I couldn’t get the help I needed. Hopefully, by raising awareness, people with epilepsy will have a more positive path through life.”

The play has been written by Ant Stones, GSC’s Associate Playwright, and directed by Indiana Lown-Collins. To further champion those living with hidden disabilities, ‘The Purple Princess’ company includes artists with epilepsy and other hidden disabilities, who have all been incredibly open about sharing their experiences.

The play is touring local primary schools this Spring, including during National Epilepsy Week, which is taking place this week (24-30 May).

The Purple Princess will also be performed in Guildford’s Castle Gardens on 29 May and filmed so it can be viewed by the wider public on YouTube.

Serena Bowen, Teacher at Guildford Grove Primary School said:
“The Purple Princess was a wonderful way to introduce such an important and relevant subject to our children. The pre-teaching ideas helped prepare the children for the performance and the Q and A session showed how deeply they had thought about how epilepsy would impact on a person’s life and how they could help if faced with such a situation. The actors pitched the story and information perfectly and the children left the hall feeling empowered and happy.”

Mark Youngman, SWR’s Customer and Communities Improvement Fund Manager commented:
“We’re proud to be working with Guildford Shakespeare Company to communicate such an important message to children along our network. The play is an engaging way to educate children on what to do if they were ever to witness someone having a seizure, whether that be at home, in public or on one of our trains. We are passionate about supporting the communities we serve and always looking at ways we can make every one of our customers feel safe on the SWR network.”

SWR’s support forms part of a wider Customer and Communities Improvement Fund, which is designed to support projects that have a community benefit or address an area of social need in their locality.