Food on the Move delivers over 20,000 meals to families in need 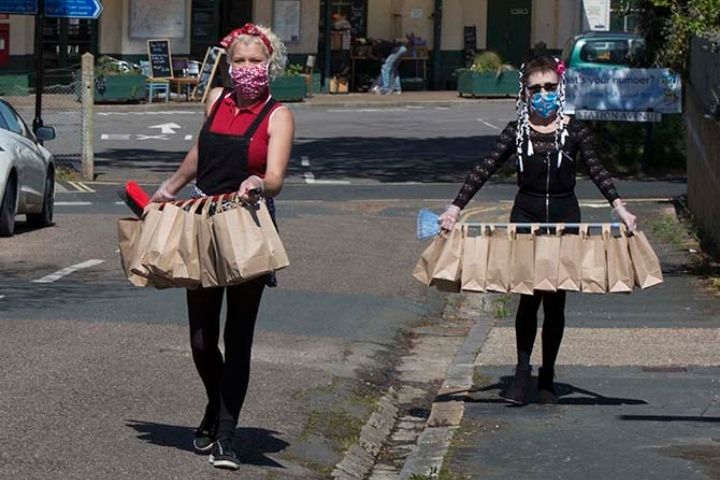 Food on the Move – an Isle of Wight and mainland community organisation which delivers food to families in need – has marked one year of operation, delivering over 20,000 meals.

The community organisation was established by the Isle of Wight and Lymington-Brockenhurst Community Rail Partnerships (CRP), during the first national lockdown, with £3200 worth of support from South Western Railway (SWR) and £5000 from Cross Country. More than 200 meals were delivered to people and families in pockets of deprivation around the Island rail corridor, as well as on the mainland in Lymington and Brockenhurst, during the first week. Within a month, the team scaled up to deliver 400 meals per week, and twelve months on, over 20,000 meals and food parcels have been delivered.

During spring and summer, the CRPs usually host Music on the Move, a series of events for rail passengers and communities, but with few people travelling, and many families facing far more pressing needs, the team quickly pivoted into sourcing, prepping, and delivering non-perishable goods and freshly cooked meals. The operation has been running out of the Gaslight Café in Sandown, thanks to two resident chefs, and a number of tireless volunteers.

To help identify families in need, Food on the Move has established partnerships with 14 local schools, housing services, and the Department for Work and Pensions. Local supermarkets have also lent a hand by making surplus food available.

Since SWR and Cross Country’s initial support, the organisation has raised more than £70,000 from the Hampshire and Isle of Wight Community Foundation, Wight Aide, the Isle of Wight Council’s Connect 4 Communities, the National Lottery Foundation, and the National Emergency Fund. It is currently seeking further support, including from the community – donations can be made via their recently launched JustGiving page. The Isle of Wight CRP is also working with SWR’s commercial team to develop a sustainability plan for future operations.

Bobby Lock of the Isle of Wight CRP said:
“With tourism being the source of so much employment on the Island, many local people have lost their jobs, and there are a number of families who needed additional support. Similarly, in Lymington and the New Forest, we have seen increased need with people who have lost their livelihoods.

“Whether it’s single parents, carers, elderly people, women in emergency accommodation or otherwise, we just want to help those who are really suffering in the face of the pandemic.

“We are currently seeking further support, and all donations are welcome. It costs us about £3.99 per meal and £10.00 per box of non-perishable groceries for a family of four, so every pound donated goes a really long way.”

Paula Aldridge, SWR’s Community Rail Manager, added:
“Community rail is all about bringing communities together, and Food on the Move is a great example of the initiative at work.

“We are proud to have played a small role in getting the organisation off the ground, and we look forward to continuing to work with Bobby and the wider team to help ensure they can continue to do what they are doing so well.”