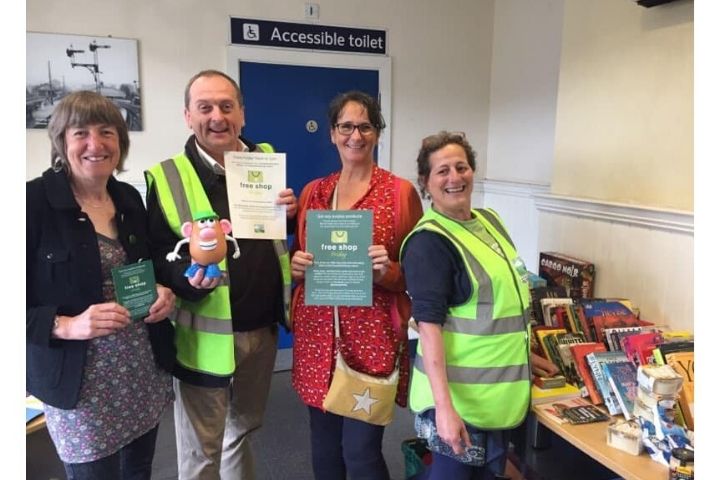 Free Shop Friday, which was introduced a year ago by East Hants Community Rail Partnership (CRP) at SWR’s Petersfield station, to help redistribute food which would otherwise have been wasted, celebrates its first birthday this week.

The CRP, which covers Liphook to Rowlands Castle stations, does not request any level of means testing for the food – it just aims to see waste reduced by redistributing to local people food that might otherwise have been destined for the bin.

Although it cannot operate during the COVID pandemic, due to social distancing, partnership officer Lucy Lomax, who runs the scheme, has continued to collect donations and pass them on to other local charities. Her continued commitment to the community is typical of Lucy, who prior to lockdown was presented with the Town Mayor's award in recognition of her support for the local community.

East Hants CRP, funded annually by SWR, and other local partners, setup the Free Shop Friday project working out of its hub at Petersfield station, which it leases from the train operator on a peppercorn rent. The scheme quickly proved a success with locals and it even began operating on Saturdays in response to demand.

SWR’s Community Rail Manager, Andy Harrowell said: “Free Shop Friday has become a key part of East Hants CRP support for the Petersfield community, and we’re pleased to be able to continue to support this through funding the CRP and providing the space for the work. Happy Birthday and here’s to supporting more people in the future.”

Based on her efforts with Free Shop Friday, and other work on the CRP, including education work with SWR’s Community Ambassadors, Lucy has been appointed as the new part-time officer for Surrey Hills to South Downs CRP - the newest CRP on the South Western Railway network. In her new role she wants to explore the possibility of undertaking similar community work on the stations between Haslemere and Farncombe.