Basingstoke, Bournemouth, Portsmouth, and now Southampton, turn a shade of the rainbow to support Pride celebrations on the South Western Railway network.

Upcoming - Isle of Wight Pride, Pride in Surrey, and Weymouth and Portland Pride.

South Western Railway (SWR) staff have decked stations in rainbow colours, including a special rainbow effect installation on the overbridge at Southampton Central, to celebrate a summer of Pride.

During the day, each window on the rainbow overbridge at Southampton Central is bathed in a colour from the iconic Pride flag, whilst at night the effects can be seen from the station’s exterior. 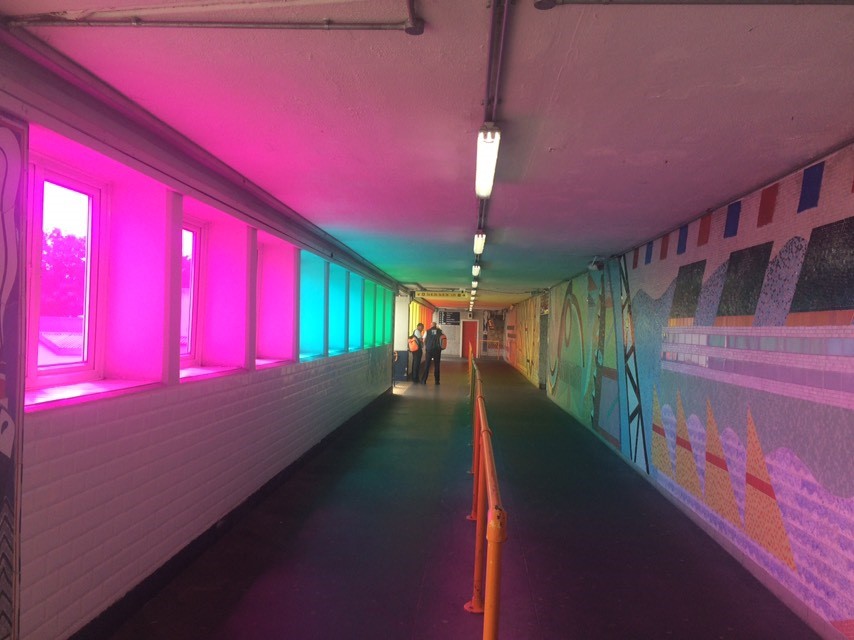 “We are delighted that so many of our colleagues across the route have got in the mood for Pride. Last month, the Basingstoke station team adorned the foot tunnel with rainbow artwork.

“The team down in Southampton Central, not to be outdone, installed the rainbow effect windows as well as hoisting an eight-foot Pride flag for all to see.

“This is a great way to show our support for Pride and involve our customers and colleagues in the celebrations.”

“We know that our colleagues across the network have been doing their bit to support Pride events, so we were very excited to see the rainbow effect installation at ours.

“We truly believe that diversity is a strength, not a weakness. We hope these small, symbolic acts of inclusivity demonstrates that.”

On Saturday (13 July), Bournemouth celebrated Pride with Bourne Free Festival, the annual weekend of fun to celebrate equality and diversity.

As well as Southampton Pride (24 August), there are a number of other Pride events taking place on the SWR network this summer, including the Isle of Wight Pride, Pride in Surrey and Weymouth and Portland Pride.

For further information (and an events map), please click here.