South Western Railway was honoured at the 21st Rail Business Awards (RBA) on Thursday 21 February for its staff’s hard work and contribution to improving the rail industry for passengers.

Stephen Head, Head of Employee Relations, won ‘Young Professional of the Year’, while 80-year-old Don Buckley received a ‘Lifetime Achievement’ award for his 65 years’ service at Waterloo station. SWR was also ‘Highly Commended’ for its planning and delivery of last year’s Royal Wedding and for Jenny Saunders, Head of Stations and Revenue Protection, in the ‘Women in Rail’ category.

Stephen’s drive and passion for the rail industry has helped the franchise through a period of near unprecedented change.

Commenting on his success at the Rail Business Awards, Stephen said:

“I was honoured to be nominated and thrilled to find out my nomination had been endorsed by colleagues, who I respect highly. To win was the icing on the cake!

“I have always been fortunate to be surrounded by great role models and to work with fantastic people. I’m excited to be contributing to the future success of the South Western Railway franchise.”

80-year old Don Buckley received the ‘Lifetime Achievement’ award for his 65 years’ of dedicated service at London Waterloo station to a standing ovation from the audience at the ceremony. Don arrived in London in 1953 and joined the station team at 14 as a messenger boy. He now spends his three shifts per week helping visually impaired and disabled people, and sharing his unmatched knowledge of the station with passengers needing directions or assistance. 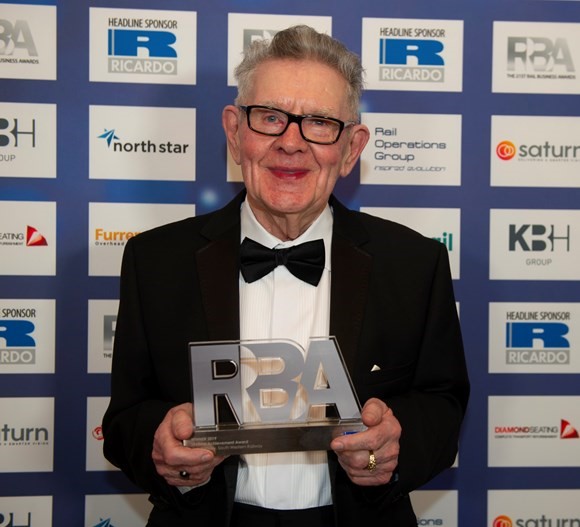 Don, commenting on his near seven-decades at London Waterloo station, said:

“We’re here to help people wherever we can. I’ve made some great relationships with people I see at the station - they always stop to say hello. I’ve met some unbelievable people over the years: Sir Roger Moore, Alfred Hitchcock, Matt Damon and Sir Stanley Matthews.

“The station has changed a lot since I’ve been here: all the gentlemen wore bowler hats in those days, and everyone had an umbrella. It was hard back then but I love working here, and it’s still the station I love. I have no plans to retire, despite my wife, children and grandchildren all asking. Waterloo station is a part of my life and I’m happy.”

SWR - jointly with GWR - was ‘Highly Commended’ for its staff’s hard work to ensure travel plans for the Royal Wedding of Prince Harry and Meghan Markle at Windsor went without a hitch. This is the second time SWR has been recognised for this achievement in as many months following the Golden Whistle Award win in January.

Jenny Saunders was ‘Highly Commended’ in the Women in Rail category for her passion and leadership. Jenny leads from the front: working to improve diversity in the UK rail industry by successfully encouraging more women applicants, as well as overseeing changes to Waterloo station in 2018, the transformation of SWR’s event handling at stations and the overall improvement in the passenger experience at stations across the network.

Hosted by broadcaster Jeremy Vine, and organised by the Railway Gazette Group, the event attracted almost 700 representatives from across the rail industry. Each entrant was assessed by the RBAs’ panel of independent judges.