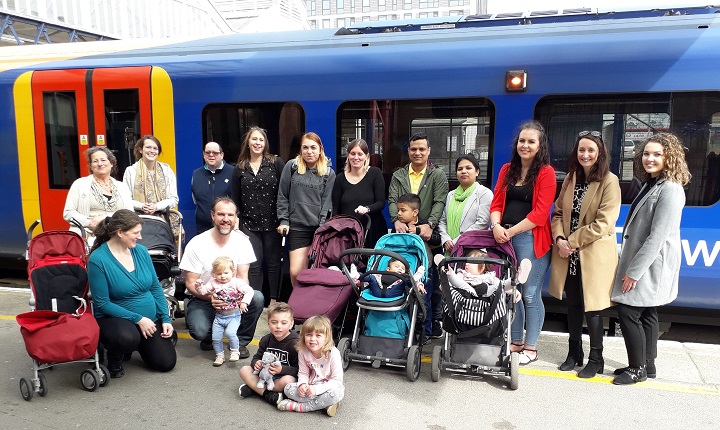 The annual awards, organised by the Association of Community Rail Partnerships (ACoRP) recognise and reward the hard work and dedication of everybody involved in community rail.

SWR’s exceptional team of Community Ambassadors have been shortlisted, with the East Hants, Isle of Wight and Three Rivers Community Rail Partnerships in the Involving Diverse Groups category, recognising their unique Try the Train trips.

The partner groups have helped provide memorable experiences for individuals across the route, helping boost the confidence of young people with learning difficulties, school children, scouts and brownies, and mums-to-be / new parents.

East Hants CRP is also a contender in the Most Enhanced Station Buildings and Surroundings category, in recognition of its efforts to maintain the Petersfield Information Hub.

The hub, which is leased on peppercorn rent from SWR and has been supported with funds towards refurbishment over the years, is staffed by volunteers throughout the summer, promoting local attractions and providing visitors friendly support and advice.

SWR is particularly pleased to see recognition for Blackmore Vale CRP’s first ever line guide, in the Best Marketing or Communications Campaign category. While traditional guides are fold-out maps, promoting one or two local attractions for each station, the one produced for stations between Tisbury and Crewkerne is over 30 pages long, raising awareness of a whole host of opportunities to explore in each community. It even has recommendations for food and drink, as well as activities for children. Those who pick up the guide from an SWR station can enjoy a travelling music mix list, suggested by those involved in the CRP.

SWR also welcomed the shortlisting of Hounslow and Richmond CRP, so far the only London based CRP, for its work with the National Citizenship Service, in the Involving Children and Young People category. Joint work last summer saw youngsters spend their time helping to spruce up various stations along the line, and has resulted in the group adopting three stations - Chiswick, St Margarets and Whitton.

The Friends of Templecombe, one of SWR’s longest serving stations adopters, will pit their efforts against others in the It’s Your Station award. The well-established group, which has created a wide range of flower displays at the station, including on the disused platform, and holds monthly coffee mornings for passengers, is no stranger to award ceremonies, having previously won and been highly commended at the National Rail Awards.

The shortlist is complete with two nods in the photography category - one for Paul Blowfield, Secretary of Friends of Templecombe, capturing the group’s efforts at the station, and the other for SWR’s very own Community Rail Manager, and Community Ambassador, Andy Harrowell, showing the delight of the Try the Train trip for new mothers from Homestart Butsers.

A panel of industry judges have chosen the winners for all categories except the photo competition, which is open for a public vote until 3 September (you can vote here).

Andy Harrowell, SWR’s Community Rail Manager, said “I am really pleased that our CRPs and the work we undertake with them have been recognised in this way. Each year we provide over £250,000 to support CRPs across our network, helping to provide part time line officers and fund projects that connect communities with their railway station. These activities really make a different to so many and it’s great that this is being recognised nationally.

“I’m equally delighted to see our Community Ambassadors, staff who volunteer beyond their day jobs to help people learn more about the railway, recognised once again. We wish all those shortlisted well and have our fingers crossed.”