Have you spotted SWR’s Trainbow? 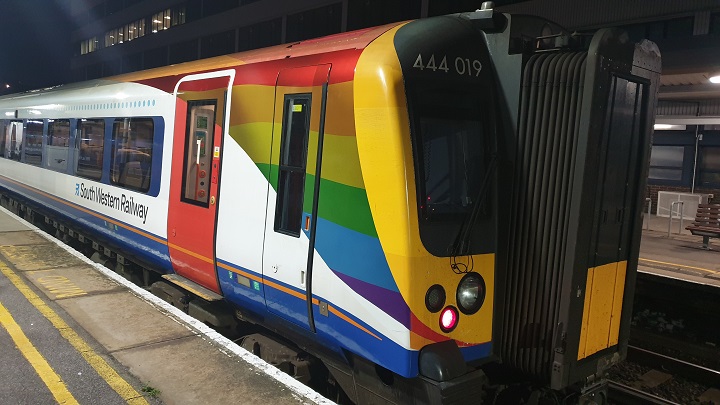 South Western Railway has launched its first ever ‘Trainbow’ service ahead of this weekend’s Pride festival in Southampton.

The 'nose' of the train has been liveried with the iconic Pride flag to show SWR’s support for LGBT+ colleagues and customers.

SWR staff already introduced a special rainbow effect installation on the overbridge at Southampton Central to celebrate Pride events across the network earlier this summer. During the day, each window on the rainbow overbridge at Southampton Central is bathed in a colour from the iconic Pride flag, whilst at night the effects can be seen from the station’s exterior.

Colleagues at Southampton have also renamed the station ‘#SOproud Central’ – a nod to the twitter hashtag and Pride campaign.

Glen Willie, Inclusion and Diversity Manager for South Western Railway, said:
“We’re very proud to be supporting Pride in Southampton and what better way to show it than with the Trainbow.

“We’ll be celebrating Pride on the day itself at ‘SoProud Central’ and look forward to welcoming visitors to the station and city of Southampton.

Satty Potiwal, Duty Station Manager at Southampton Central, said:
“We truly believe that diversity is a strength, not a weakness. We hope these small, symbolic acts of inclusivity demonstrates that.”

For further information (and an events map), please visit southwesternrailway.com.