The UK has a long and storied history of beer. Records show that the first UK-brewed beer dates back to 100CE, and some of the nation’s oldest registered companies are breweries. In more recent times the UK has seen an explosion of craft breweries. In 2018 out of 2,274 active breweries in the UK, 1,978 were microbreweries, almost 90%. With so much choice on offer, we’ve crunched all the data to present you with the ultimate ranking of the best independent breweries in the UK to help you work out where to start wetting your whistle.

Drawing on data from Google, RateBeer and the Society of Independent Brewers, this map is your definitive guide to the craft beer scene in the UK. Dive in to find out what the UK’s craft beer hotspots are, faster than you can say ‘A refreshingly pale, hoppy palate pleaser with an enduringly pleasant malty finish.’ 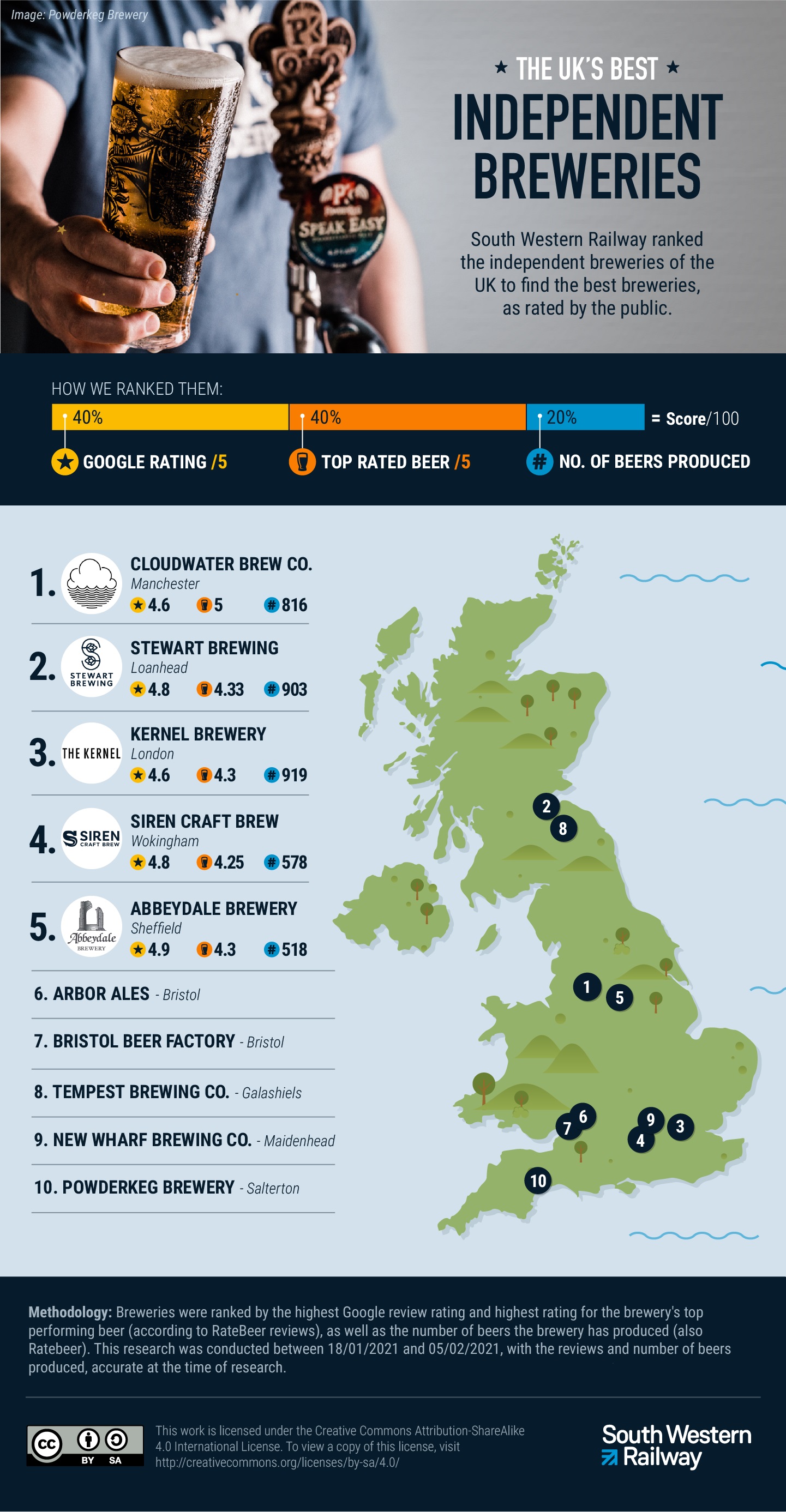 What is an independent brewer?

An independent brewer typically operates outside of major alcohol industry holdings. The volume of beer produced is far lower than that brewed in larger industrial breweries, which gives these craft breweries more room to experiment with unusual flavour profiles. As a result of this, independent brewers will often have a broad range of different styles on offer for you to try, from sours to ciders, from IPAs to triple IPAs. Beers produced in these microbreweries are often made using natural ingredients and according to a secret master recipe, ensuring that the taste is inimitable.

Below is a table showcasing the top 50 most popular independent brewers in the UK. 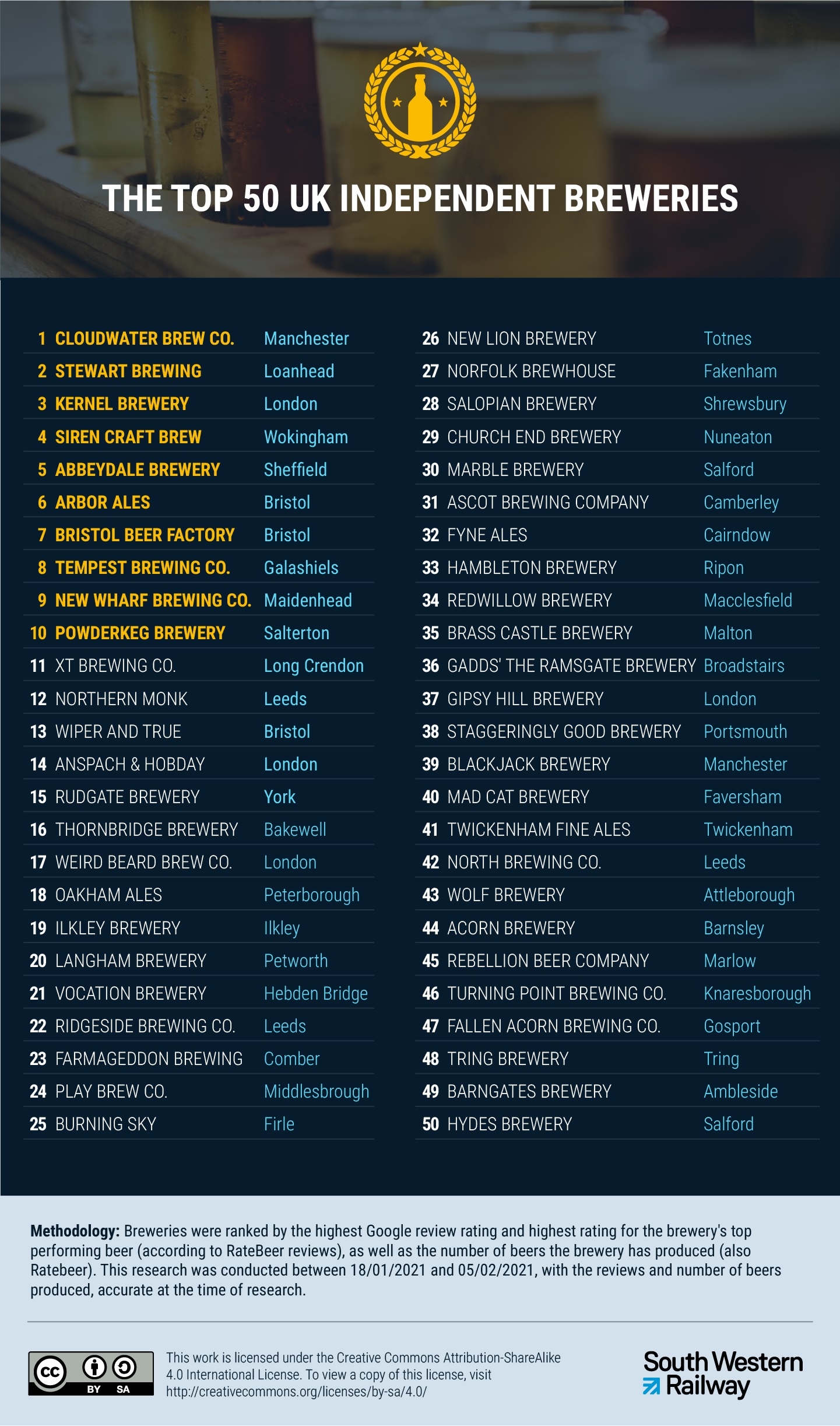 The table above shows four distinct independent brewery capitals in the UK: London, Leeds, Manchester and Bristol. With the 2020 SIBA British Craft Beer Report showing a growth in the number of brewery taprooms across the nation, your independent brewery tour should start in these areas.Other highlights from the report further reinforce the notion that the UK is a nation of craft beer lovers, with the number of women drinking beer at least once a week almost doubling year on year, and a growing perception that genuine craft beer can only be produced by an independent brewer, with only 3% of respondents believing that a multinational global can make craft beer.H2: Independent brewers in the South West region

The South West is blessed with a number of highly regarded independent brewers.

The Kernel Brewery taproom is located near to London Waterloo station, in Bermondsey, South London. Known for its upfront taste notes, with plenty of hops, beers from Kernel are bottled with living yeast in the bottle, giving the beer time to further develop its flavour in the bottle. Kernel’s bottles are immediately recognisable by their minimal no-fuss design and have become drink-on-sight among beer lovers. Kernel has been garlanded with awards since first appearing on the scene in 2010 and is a must-see on your tour of the UK’s best independent breweries.

Siren’s beers jump out; both in terms of their flavour and their strikingly colourful packaging. Run by a genuinely passionate group of people, since 2013 Siren has embarked on a relentless pursuit of perfection with several beers held in high regard by the UK’s craft beer community. The taproom can be found a short bus away from Wokingham station. Taking the full brewery tour is well worth it if only to see the amazing collection of beer barrels in the cellar. Of course, while you’re there, you may as well sample the delectable and varied range of Siren beers on offer in the taproom.

Based in Easton, just a short walk from Bristol Temple Meads, you’ll find the Arbor Ales Brewery. Operating since 2007, the team at Arbor certainly know what they’re doing and this is reflected in the brewery’s high position in our list. With gluten free options available alongside classic craft beer flavours such as amber ales, as well as the ‘it has to be tasted to be believed’ Faked Alaska Pudding IPA, there’s plenty of choice available whatever your taste.

Bristol Beer Factory is a Bristolian institution. Established in 2004, it has grown considerably and now boasts a pub of its own, The Barley Mow which you can visit to sample fresh Bristol Beer Factory brews. The Barley Mow is moments away from Bristol Temple Meads train station, and the brewery itself is located in the south west of the city, in the Bedminster area. Tours of the brewery include three pints and a takeaway bottle, making them great value for money and a certain stop on your journey of independent breweries.

The last brewery on our list is found in Devon. Powderkeg believes in doing things slowly to ensure fullness of flavour and maximum quality. Inspired by the rebellious spirit of beerhalls throughout history, Powderkeg has an edgy and informal vibe which comes right through to the beer you drink. Known for the cleanliness of its brews, Powderkeg is a must visit independent craft brewery in the South-West of England. With ABVs ranging from a full-bodied 6% to a lighter 1.2%, there’s plenty of beers to choose from.

With such a wealth of independent brewers in the UK on your doorstep, there’s only one thing for it if you’re a beer drinker. Head on to the breweries in our table and discover a whole world of enrapturing flavours, aromas and delights to sample the best the UK’s Independent Breweries have to offer.

The most beautiful places in Dorset

It's hard to choose the most beautiful places in Dorset - but look inside for our list!

Discover one of London's strangest and spookiest railways

The best bonfire night displays in London and the south west