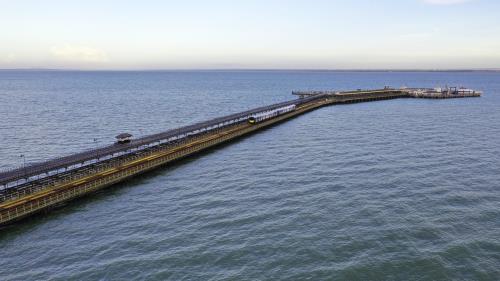 To the delight of a gathering of people both at the station and onboard, the new Class 484 train set off at 05:35 – taking customers up to Ryde Pierhead before heading 8.5 miles south to Shanklin.

The first train follows a £26 million transformation of the railway’s trains, stations and infrastructure as part of South Western Railway’s Journey to Better.

This project, which has been funded by the Department for Transport, Isle of Wight Council and Solent Local Enterprise Partnership, has seen the old 1938 tube trains, which had served the Island since 1989, eased into a well-earned retirement.

These trains have been replaced with the new Class 484 fleet, which are set to transform the customer experience, with upgraded interiors, wheelchair spaces and free Wi-Fi.

To complement the new trains, the Island’s rail infrastructure has been drastically improved, with upgraded tracks helping customers to enjoy a smoother ride and raised platforms set to improve accessibility.

“We are so excited to welcome our customers back onboard having completed the biggest upgrade to the Island Line in over 50 years.

“From new trains to improved stations, the long list of benefits that come with this upgrade will give a real boost to the Isle of Wight’s public transport infrastructure, connecting communities and making it easier for visitors to explore the Island.”

“This investment totally transforms rail travel on the island, updating trains, stations for both resident and tourists.

“With more punctual, comfortable and reliable services for both residents and tourists, this underlines our commitment to creating a railway that puts the priorities of passengers first, all part of our ambitious Plan for Rail.”

Member of Parliament (MP) for the Isle of Wight Bob Seely said:

“I’m delighted that the new trains are finally now in operation, they have been a long time coming.

“When I was first elected as the Island’s MP in 2017 the future of Island Line was uncertain. Thanks to a team effort of local campaigners, members of the previous council administration, and myself, we persuaded government to underwrite this investment.

“I am grateful to South Western Railway and the government for listening to us and I am glad to see the upgrades finally come to fruition with this significant investment.

“This is another good day for the Island. We now have decent trains running on an improved track which will make travelling easier and more comfortable for Islanders and visitors.

“This improved service will give a boost to the Island’s tourist economy and allow visitors to continue to access the award-winning Isle of Wight Steam Railway at Havenstreet through the interface at Smallbrook Junction.

“I look forward to seeing these trains carrying thousands of passengers over the coming year.”

"It really is great news that the upgrade work to the rail line is complete and we have our new trains running, once again, to the end of the pier.  This is positive news for those that depend on the rail link and is part of the wider improvements we are going to see at the Ryde Interchange in the near future.

“It's been a long wait but I am sure that many people are delighted they can once again utilise the train service between Shanklin and Ryde Pier Head and any of the stations in between.  The continuous connection with the mainland is a vital lifeline for our Island and supports our tourism, leisure and job destinations equally"

"The re-opening of the Island Line is great news for the Isle of Wight, offering sustainable transport options which will benefit both commuters and visitors. I'm delighted the Solent LEP has helped make this possible through its Local Growth Deal investment and which, alongside improvements at Brading Station, will offer a viable, attractive and green travel solution for those visiting or living on the Island."